A team from the Campus’ Scientific and Technological Center of Valparaiso (CCTVal), participated in the manufacturing of parts for the sTGC detectors which showed satisfactory results during the last evaluation carried out at CERN, in Switzerland, positioning Chile as a pioneer and only nation in South America currently producing these devices.

A team from the Campus’ Scientific and Technological Center of Valparaiso (CCTVal), participated in the manufacturing of parts for the sTGC detectors which showed satisfactory results during the last evaluation carried out at CERN, in Switzerland, positioning Chile as a pioneer and only nation in South America currently producing these devices.

A significant step was achieved by a team of scholars and researchers from the Scientific and Technological Center (CCTVal), of the Federico Santa Maria Technical University, after passing the second manufacturing stage of the muon particle detectors, process evaluated and carried out at the European Center for Nuclear Research, CERN.

The positive result was achieved after finalizing the first manufacturing stage of the prototype known as Module 0, led by a team from the High Energy Physics Laboratory belonging to the Campus. The piece called sTGC (small-strip Thin Gap Chamber), will be part of the Large Hadron Collider’s Small Wheel (LHC), within the ATLAS project, one of the most important and momentous experiments carried out at CERN, which seeks to explain the origin of the Universe.

The prototype passed the gamma radiation test to which it went through after a long trip to the Center’s premises, located in Geneva, Switzerland. The purpose of the test was to verify the level of impact on the device after going through flying height, as well as assessing its efficiency, which was expected to be higher than 95%.

This is how it was explained by the CCTVal researcher and coordinator of the “sTGC for the ATLAS update” coordinator, Rimsky Rojas: “the detector arrived safe and sound to Geneva. That’s where we performed the test to the last part of the detector’s assembly and where we also subjected it to gamma radiation, double the intensity that the real detector will have to endure once it becomes part of the Large Hadron Collider’s small wheel”.

Likewise, the “sansano” engineer explained that, “we are quite pleased with the results, all of the tests performed at CERN were satisfying. The detector performed well under the radiation, and thanks to that, the project will move forward since we have been approved by the USM-CERN collaboration to manufacture detectors, qualifying our laboratory as a building site”. This gives green light to continue with the initiative that contemplates the fabrication of 140 detectors, type sTGC.

Within the framework of the collaborative work between USM and CERN, Chile has become the first Latin-American country to build muon particle detectors for the LHC, member of a group of five countries working towards this purpose, together with China, Russia, Israel and Canada.

“The Small Wheel consist of two technologies: one is the TGC and the other one is called Micromegas. We work in the area of TGC, together with four other countries”, Rojas details. “Together we have the task of building parts and for this, we conduct weekly coordination meetings, we work with the same materials and we carry out building procedures to standardize the detector. We have to do all of this because the idea is to build the same detector in different ways, under the same technology”.

As the project engineer explains, the Small Wheel is made up by small and large sections, placing three sTGC detectors in each of them, this way, obtaining three models of different sizes for each of the device’s sections. Currently, the USM team works on building a detector production line, led by the team of technicians that at the moment consists of three professionals, in addition to the three USM engineers who have so far worked on this project.

The muon detectors manufacturing project is financed, since 2013 with CCTVal contributions, in addition to income from CONICYT’S Scientific and Technology equipment fund, FONDEQUIP. Likewise, there is a strategic alliance between the USM and the Pontificia Universidad Catolica de Chile, institution in charge of performing efficiency and quality checks on the 140 detectors built by the USM. Rimsky Rojas explains that “nowadays, a part of the project is financed thanks to an Anillo fund, led by Sergey Kuleshov who is responsible for the project, as a way of contributing to the scientific research developed by the USM team for the Chile-CERN collaboration

Finally, the CCTVal engineer highlights the participation of two “sansanos” residing in the Center for Nuclear Research in Geneva, the researchers Pablo Ulloa, a member of the USM High Energy Physics Laboratory; and Geraldo Vasquez, ex-USM student, whose thesis is about the sTGC production. Thanks to the collaboration of these two professionals during the prototype evaluation stage, the expected results were achieved and the USM now holds the privilege of being the only Latin American University to manufacture muon detectors for the ATLAS experiment. 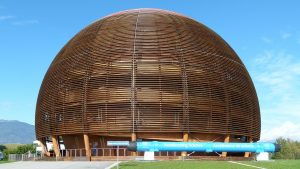 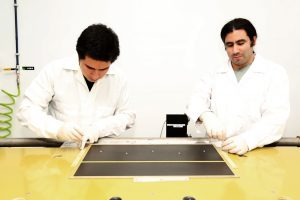